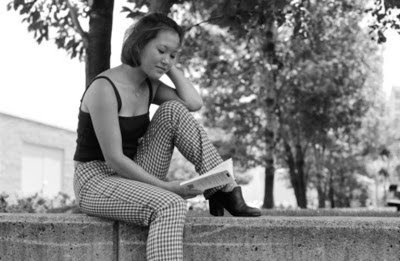 I'm cheating a little here, because this is actually a repeat of a post I ran on my own blog in February, but given that August is "Read a Romance Month" I thought it was a blog post worth repeating.

I originally wrote it on Valentine's Day, when there was a hashtag trending on Twitter and picking up speed—#WhyReadRomance—wherein people shared all the reasons they read romance novels.

Here's what I wrote at the time, in response:

I love this, and yet I can't help but wish there was no need for that hashtag; no need for those readers to have to explain why they read what they read.

After all, you would never see hashtags for #WhyReadMysteries, or #WhyReadLiteraryFiction, would you? No one's ever going to be teased for reading modern poetry, or picking up a thriller. And no one's ever asked me, 'Why on earth would you read Vonnegut?'

Choose a romance novel, though, and eyes will roll, the implication being romance is a lesser form of fiction, not deserving of a place at the big table of 'real' writing.

When I disagree—when I point out I write romantic fiction, and that I have friends who write for Harlequin, and that the genre is a broad and varied one, like any other genre, filled with writers who are brilliant at their craft—I only get the rolling eyes again. And if I name specific books as evidence, I'm often told, 'That book transcends the genre.'

(If you want to set my teeth on edge, just tell me that a book "transcends the genre". What that tells me, plain and simple, is you haven't read enough books in that genre).

Still, at that point, I just tend to bite my tongue, and end the argument. I do this because I remember my first year Philosophy course, at university, in which the professor explained to us why it was pointless to argue with someone who was starting from a fixed and different point of view. You'll almost never change that point of view, he warned us, and they won't change yours, and so the two of you will argue in a parallel dynamic with no end, that looks like this: 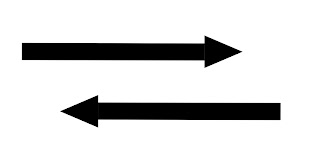 But I'm an optimist, you see. And I believe a lot of misconceptions can be changed, or challenged, by a little education.

So last weekend, in the middle of a day-long course that I was leading with a great, enthusiastic group of local writers who were wanting to explore how to use love stories within their work, I gave them all a sheet of excerpts taken from four books I owned, that I'd read and enjoyed.

One book, I told them, was a Harlequin Romance. One was a literary novel. One was written by a man. And one I'd put in as a wildcard.

Here are the excerpts:

Lorenzo sat at his desk, idly toying with the orrery. It was a mechanical model of the solar system, showing everything in its relative position. There was something soothing about watching how the moons and planets followed their own unwavering path, each one taking its own specific place in a dance so intricate it was almost beyond human comprehension. Galileo had understood it, even though it went against everything he’d been brought up to believe.

The courage of that, the audacious brilliance never failed to impress Lorenzo. Galileo had had a vision, and he had been unswerving in his pursuit of it. But even he, with his towering intellect, had never fully got to grips with the complexities of women.

With a flick of his finger Lorenzo made the earth spin on its axis, and then slowed it right down again as he thought back to last night. That was how it had felt in the temple, in the candlelight and the silence. As if he had slowed down time. Stopped the world, for a little while.
**********

He put his hand out to assist her on the last high step into the villa grounds. She looked at his hand in front of her and wondered if he meant to stop her.

‘Signorina. May I take your hand?’

She could feel her face reddening, warmth upon warmth encroaching. She placed her hand in his palm and took the last step, breathless. He smiled again and turned her hand over. Her open palm was warm from the climb. Dante stroked the skin, none too soft, that he held in his own fine hand, stirring the blood underneath to quickness. He kissed the white inside of her wrist, quick and light, and held her hand for a few minutes more as they walked through the shaded gardens.
**********

He grabbed her to him and stood for long minutes kissing her and kissing her, dragging his hands over her, skating over her curves, enjoying her. Even through the thick cloth of her coat, the feel of her was something wonderful and the smell of her perfume was filling him. The kissing went on and on, his hands grew more and more insistent until she was pressed against him and moaning deep in her chest, rubbing herself on him, grinding against him with his hands on her as her coat rose up over her hips and her skirt followed it, sliding over her thighs.
**********

As he said his goodbye, it occurred to him that maybe, just maybe, he meant something to her. Too bad he had so much to do. Too bad armies were on the march. Too bad Laura Brittle stood in the doorway, watching them.

He wanted to clasp Polly Brandon in his arms. He had watched over her on the Perseverance and he was uneasy about leaving her without his protection. Yes, I am proprietary, he wanted to shout to Laura Brittle. Why is it your business?

He did nothing of the sort. ‘Stay off the water, Brandon, and you should be all right,’ he said gruffly, then turned on his heel as smartly as any Marine on parade, and left her standing alone in the courtyard.

Want to know where they were really from? From the bottom up, then...

The fourth excerpt is from Marrying the Royal Marine, a Harlequin Historical Romance, by Carla Kelly.

The third excerpt is from The Good Mayor, a literary novel by Andrew Nicoll.

The second excerpt is from Dante's War, a literary novel by Sandra Sabatini. 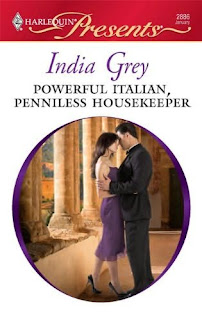 And the first excerpt, the one most of the writers in that group felt sure was from a literary novel, is from Powerful Italian, Penniless Housekeeper, a Harlequin Presents Romance, by India Grey. It's a beautiful excerpt, a lovely piece of writing, and the hero is remembering a night that he spent talking to the heroine. Just that, and nothing more.


Surprised? If you already read romance, I'm sure you're not. Most romance readers judge a book by what's inside it, not what's printed on the cover, and they know the titles of these books aren't chosen by the authors—they're a construct of the marketing department of the publisher, and often have no actual connection to the story.

And the story, in the end, is why I read a novel. Any novel. Literary, Science Fiction, Mystery, or Romance. Good writing is good writing, and no genre, in my optimistic world view, is a lesser form of fiction.

That's why India Grey's novel sits alongside Andrew Nicoll's, on my bookshelves. And that's why I read romance.
Posted by Susanna Kearsley at 8:55 PM