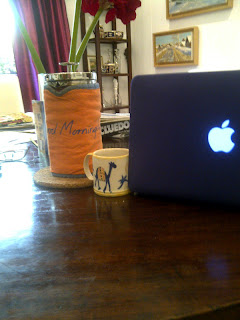 Why? It means freedom. It means stretching the writing muscle, writing for the sheer joy of it. Writing without thought to publication. It is the one time of year I can truly turn the internal editor off and write what ever comes into my mind. I write for me.

The first of November begins a month of just writing...bliss. It is even more appealing now that I've been published. The weight of expectation is upon me, but not for NaNo. No one has to see what is written - ever. If on day one I want to write a sci fi gothic tale of medieval chivalry...then I can and if on the second it becomes a dark urban fantasy that's good...on third it may move from first person present tense and on fourth to omniscient narrator...

The joy is... it doesn't matter...it's time to experiment and push the boundaries. Each day is nothing more than a creative writing assignment and it is so good for the writing soul. Two years ago I wasn't going to do NaNo but I woke on the first of November and began only with a title and not a clue of where I was going....bliss. The Summer of Black Hare was created and I wrote a long piece of fiction for the first time in first person...before I had been to afraid, to afraid of failure, but with Nano the only failure is not writing and that is a gift.

NaNo gives you permission to write what ever comes into your head...even if that is I want chocolate now....it's permission to experiment, it's permission to be total crap, to try all the techniques you have read about but were afraid to ruin the work in progress. NaNo means give it a go...

What NaNo doesn't mean is that you have a perfect work ready for the world - you won't. At best you will have a very dirty draft and worst you will have 50,000 words of drivel....but you will have used your writing muscle in a different way and have grown as a writer because of it. You will be stronger when you write your next proper book....

Are you doing NaNo this year? Even though I am doing edits on A Cornish Affair I'm hoping to wake on 1/11/12 and begin something fun but I just don't know what yet!

I’ve just been catching up on some of the vampire stories that have been made into TV series – True Blood and The Vampire Diaries – and I’m also eagerly awaiting the final instalment of the Twilight films.

Something struck me about all these though – the fact that I don’t like any of the heroes!  I much prefer the other guy (in the case of Twilight) and the bad guys in the other stories.  I have to admit I thoroughly disliked Edward Cullen with his controlling ways and strange supposedly protective measures when it came to his girlfriend; Jacob Black is so much more passionate (and yes, alive!).  I find Bill Compton deadly dull (sorry, bad pun), while Erik Northman, the Viking vampire, is mischievous and fun in comparison.  And I can’t for the life of me like Stefan Salvatore.  His brother Damon may be evil, but he’s never boring!

So is it just me, or does this seem wrong somehow?  Surely in a story we should be rooting for the good guy, the one who is trying to do the right thing (and in this case, abstaining from drinking human blood in order not to hurt anyone)?  Of course we all love a really well written “bad boy” story, but those normally end with him being reformed by the heroine and turned into the good guy at the end.  Or the reader is shown from the beginning that he’s just hiding his true colours behind a façade and needs to fall in love in order to be saved.  But that’s not the case with these vampire stories as far as I can see.

It could of course have something to do with the fact that I personally find the actors portraying the bad guys more attractive, but I read the books first and felt the same way.

I don’t really have an answer here, I guess I’m just kind of thinking out loud.  But I’d love to hear everyone else’s take on this – discuss please?

And please come back on Sunday to hear from Liz
Posted by Christina Courtenay at 7:06 PM 13 comments:

This evening, we had a committee meeting of my writers' group to decide the programme for the coming year. This is a fantastic local group that I belong to (I am Vice Chair, in charge of Vice)—we meet twice a month. One meeting is usually a workshop or a speaker, and the other is usually a manuscript critique evening, where we look at manuscripts up to about 1500 words long.

It's a fairly large group; there are thirty members, of which twenty-two or so usually come to meetings, where we can usually get through ten to a dozen manuscripts. Obviously, everyone has a different writing style, and a different critiquing style too. With twenty-odd people commenting on every manuscript, the depth and content of critiquing is going to vary a lot. Some people will love an aspect that other people will hate. Some will focus on technical craft, and some will focus on how it made them feel as a reader.

While I've always had good and useful critiques from this group, at times I've had surprising responses, too. I'll never forget the woman who harangued me for using Americanisms (I am American, and was writing American characters for an American publisher). I won't forget the time I wrote (badly) about a train crash and one of the members sent me several online resources giving me facts and figures that I needed to make my scene more accurate. One time I wrote an obscene word in my work, and a member (now long departed) told me that she could not read any further because it was the word that her ex-husband used to call her.

Tonight, we discussed the art of critiquing. Since several members have newly joined, we thought about maybe creating a resource for them to learn how to critique. But the problem is, it's very difficult to teach someone how to critique, and if you do, you run the risk of critiques becoming formulaic. We all agreed that a breadth of response could be valuable. We also all agreed that as a rule, while we listened carefully to all the critiques, we didn't always follow the advice we were given. That we had to follow our own vision in the end.

We decided to try to compile a document with our thoughts about critiquing, and how to respond to critiques, to put up on our website as an aid, or even just a way of starting a good discussion.

What's your opinion? What works, and what doesn't, in critiquing? And how do you choose to respond when you receive a critique?
Posted by Julie Cohen at 5:32 PM 3 comments:

Someone flirted with me the other day.  That might not sound like an earth-shattering event, but for an old married woman like me, it’s pretty rare.  In fact, I’ve almost forgotten how to do it and felt unsure how to respond!

I used to love flirting.  That tiny frisson that runs through you when you notice that someone has noticed you.  The frequent checking to see if they’re still checking you out.  Then eye contact, perhaps an exchange of knowing looks or shared amusement at some joke.  Finally, chatting, joking, talking in double entendres – saying one thing while your eyes are telling him something else.  All very exciting and great fun, even if it doesn’t lead anywhere.  (Although even better if it does, obviously!)

Yet, when you get married, you’re not supposed to do that sort of thing any more, so you stop (at least with other people).

But although I may have forgotten how to do it in real life, as a novelist, I love having my characters flirting.  In fact, it’s absolutely essential!  Because the best thing about a romantic novel (IMO) is the “will-they-won’t-they” part, where you know they’re probably going to get together in the end, but they have a lot of verbal sparring and flirting to do first.

I love the kind of hero who dares to gently tease the heroine, making her like him against her better judgement.  A hero who has a sense of humour is always good, and if he can use it for flirting, so much the better.  Some of Georgette Heyer’s heroes were superb at that, making the heroines flustered but excited.  Absolutely perfect!

I also like the kind of novel where the hero and heroine start off by being annoyed with something the other did.  This isn’t strictly flirting, but nonetheless it has the same effect.  As Def Leppard say in their song, “when love and hate collide”, that’s when the sparks fly.  And that’s when you know these two characters were actually made for each other, even if they can’t see it themselves.

When did you last enjoy a flirt?  If it was in the pages of a book, please let me know the title so I can buy it!
Posted by Christina Courtenay at 6:11 AM 3 comments: