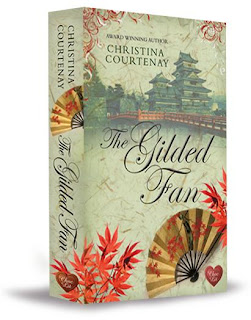 We Heroine Addicts are all about partying and today we are celebrating the publication of Christina's new book, The Gilded Fan. This is a sequel to her book The Scarlet Kimono and it sounds absolutely breathtaking.

Because it's partly set in Japan, we're having a Japanese theme to our party today, and before we get on with it, can I just say that having attended Susanna's recent Russian-themed party, and now this one, that I am asking myself why I keep on setting my books in Reading, where the most exotic thing is the bald wrinkly tattooed guy who hangs out round the corner from my house smoking a fag and saying sexist remarks to every passing female.

Anyway. On with the party, and an escape to a life that is beautiful and serene, and also full of raw fish! 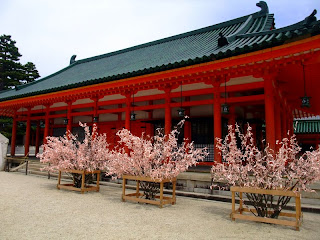 All of the Heroine Addicts are wearing gorgeous kimonos; here's Biddy's. Biddy's also in charge of the sake...whooooo! 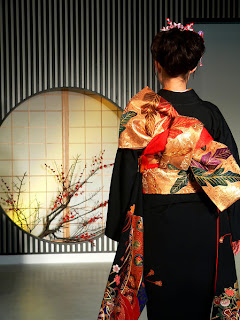 Christina has sorted out some entertainment for us in the form of a rather luscious sumo wrestler. I think the idea is that each of the Addicts get a turn with him. Nice! 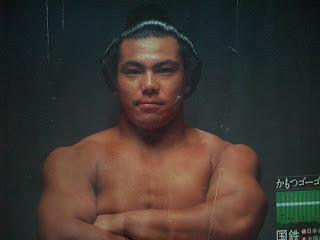 Personally though, I'm all about the food. Here are some pictures from our sumptuous buffet: 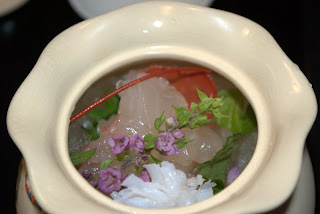 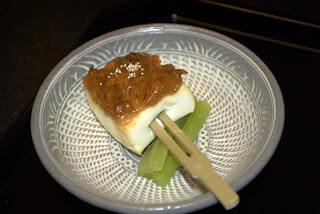 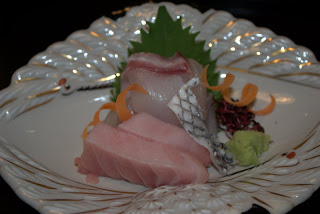 How do you start a new life, leaving behind all you love?
It’s 1641, and when Midori Kumashiro, the orphaned daughter of a warlord, is told she has to leave Japan or die, she has no choice but to flee to England. Midori is trained in the arts of war, but is that enough to help her survive a journey, with a lecherous crew and an attractive captain she doesn’t trust?
Having come to Nagasaki to trade, the last thing Captain Nico Noordholt wants is a female passenger, especially a beautiful one. How can he protect her from his crew when he can’t keep his own eyes off her?
During their journey, Nico and Midori form a tentative bond, but they both have secrets that can change everything. When they arrive in England, a civil war is brewing, and only by standing together can they hope to survive…
Congratulations Christina! All together everyone...raise your sake...and toast: KANPAI!
Posted by Julie Cohen at 5:16 AM 7 comments:


Children, I've learned, have a way of reducing most things to their absolute essence.

For instance, my daughter and I were discussing, a while ago, why certain characters in books and movies appeal to us. And, since she's entered her teens now, our talk narrowed from a discussion of "characters" to a discussion of "men". More specifically, heroes.

"Well," she said, in trying to explain why she was predisposed to like a certain character, "he needs a hug."

And it occurred to me that many of my own heroic preferences could probably be easily reduced to that one common, plain denominator: Most of them could really use a hug.

Take Spock, for instance. I've always found the character of Spock, whether played by Leonard Nimoy or Zachary Quinto, to be incredibly attractive, and that archetype continues to attract me—strong and silent, self-contained, and self-protective, forced by circumstance or nature to remain calm on the surface while suppressing their true feelings, though we sometimes get a tantalizing glimpse of inner turmoil... I adore that kind of character. Hotch, on TV's Criminal Minds, is a Spock, as is Cho on The Mentalist, and there are others who fit the same mould, and who all seem to need a good hug.

And in books, I'm attracted to heroes like Atticus Finch in Harper Lee's To Kill A Mockingbird, who at times is so strong and so silent and lonely in standing for justice that needing a hug hardly covers it, but I have always been glad he had Jem and Scout with him, to give him the comfort he needed.

It can be a fine line, for me, between heroes who need to be comforted and those who need to be carried; between a strong man who's a little repressed and a man who's so damaged he'll drain all the heroine's energy. But here, again, I've discovered that using my daughter's "he needs a hug" yardstick is pretty effective in measuring heroes to find those I think are attractive.

In Jane Eyre and Wuthering Heights, for example, both heroes are dark, brooding Yorkshiremen, but I have never liked Heathcliff, or found him attractive (not even when played by Tom Hardy) (which strikes me as Odd, because, really...TOM HARDY). But after my talk with my daughter, I understand why: it's because, the way I see it, it's only Rochester—lonely and bitter from having the hopes of his younger self ruined, yet otherwise able to function and care for, not only the heroine, but his insane wife—who needs to be hugged. Heathcliff needs to be smacked up the side of the head with a large heavy object.

I know other women would argue that Heathcliff's in need of a hug, too (well, maybe a hug and a WHOLE lot of therapy), but that's my personal take on those characters.

Who's your most huggable hero?

(And come back on Thursday, for Julie's next post)
Posted by Susanna Kearsley at 4:34 PM 4 comments:


I sometimes have those moments that I just can’t face writing. It almost like a phobia. I desperately want to write because I know once it I will feel better but the dread of opening a manuscript and being faced by blank space.

I had it bad at the beginning of the year, I have a part started YA novel which I love but I have no idea where it is going. Added to this was a lack of space in my head to hold a whole new world in it to work out what to do with it.  Every time I opened the file I panicked and started gradually to lose my confidence.

I was telling Liz about this, about how I knew I needed to write for my own sanity but that the book was just making me more insane. She came up with a brilliant suggestion. For January I should use a story prompt every day and try and write something. It didn’t matter what it was, a story, a piece of description I just needed to write.

Now this sounded good, I would be working my writing muscles but there was no pressure of trying to create a novel. So I started slowly first with a suggestion from Liz and then with suggestions from my blog and Facebook.

I found myself writing in bed at night and looking forward to what prompt I had and where it would take me.

The freedom was amazing, I created characters and stories and places. The pieces ranged from sexy short stories to dystopian futures; from the heart breaking to the silly. And weirdly most were adult rather than YA.

Now it is February I have completed two of the short stories and they need some polishing before I send them out into the world. I am working on a novella set in Colorado and I have the start of a dystopian novel. Hopefully by the time my non-writing life calms down I’ll be ready and in shape to carry on my YA novel.

How do you keep your writing muscle strong?

Come back on Sunday and hear from Susanna
Posted by Unknown at 1:00 AM 3 comments: