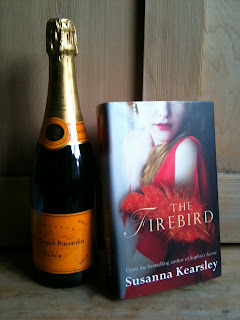 Today it’s party time here at the Heroine Addicts because it’s the official UK publication day for The Firebird, Susanna’s long-awaited new novel!  As part of it takes place in Russia, we thought we’d have a Russian themed celebration, but the characters also spend time in Scotland and Belgium, so if you’d like to bring something or someone from either of those countries (as well as Ireland since one of the heroes is Irish), please do!  Anyway, come on in and join us! 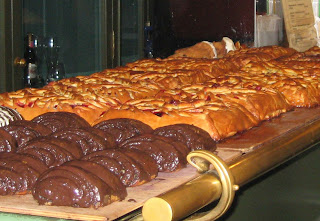 Susanna is of course the guest of honour and her escort to the party is Russian actor Vladimir Lvovich Mashkov (who most recentlyplayed the pursuing Russian cop in Mission Impossible: Ghost Protocol).  She’s very kindly brought along these mouth-wateringly delicious pies from the St Petersburg Stolle restaurant, where her characters, Rob and Nicola, eat dinner every day.

Brigid has brought a HUGE bottle of vodka because as she says, you can’t go wrong with that!  And her guest is Scotsman Kevin McKidd – perhaps most famous for his role in Trainspotting.

Anna came dancing in on the arm of famous Russian ballet dancer Mikhail Baryshnikov – as you know, she loves to dance so this should be fun!  He’s promised to bring some of his friends for later :-)

Liz has brought caviar blinis with sour cream – mmmm!  Trays and trays of them, which is just as well since they’re so delicious one (or ten!) is never enough!

And here’s Julie now with – wow! - she’s found this gorgeous Russian film director, Artyom Semakin, who recently got beaten up while interrupting a man getting violent with a woman.  A true hero!  Julie’s also kindly brought some Russian buffalo grass vodka – this is going to be quite some party!

I (Christina) am bringing champagne and Belgian truffles – seriously, you can’t have a party without chocolate! – and my guest is the American/Russian actor Anton Yelchin who was brilliant both in Terminator Salvation and the latest Star Trek film, where he played Chekhov.

So please, come in and join us and tell us what you’re bringing to the party!  We’ll be here all day (and all night and possibly a few more days ...)  Everyone’s welcome!

Nicola Marter was born with a gift.  When she touches an object, she sometimes sees images; glimpses into its past, and of those who have owned it before.  Born with this rare ability, Nicola sees it as something to keep hidden.  But when a young woman arrives at the London Gallery where Nicola works, offering a wooden carving for sale and claiming it belonged to Russia’s Empress Catherine, Nicola faces a dilemma.

With no proof of its past, Nicola’s boss believes the carving – known as ‘the Firebird’ – is worthless.  But Nicola has held it, and she knows that the woman, who is in desperate need of money, is telling the truth.

Compelled to help, Nicola turns to a man she once left, and still loves: Rob McMorran, whose own psychic gifts are far greater than her own.  With Rob to help delve into the past, Nicola travels from Scotland to Belgium, and on into Russia.  There, in St Petersburg, the once-glittering capital, Nicola and Rob unearth a tale of love and sacrifice, of courage and redemption – a story which will change their lives forever.
Posted by Christina Courtenay at 5:33 AM 5 comments:

I disassembled my desk before Christmas. I took it down so that we could put up our dining room table, which has been living under our bed for the past few years. Some of my desk is up in the loft; some of it is leaning against our bedroom wall. The contents are stashed in various places around the house where hopefully they won't make too much mess. My computer is propped up on a bookcase; when I write, I put my keyboard on my lap and rest my feet on my husband's biographies of Nico and Bob Dylan.

This isn't particularly good for my back or my eyesight, but it's worse for my thinking. I can't put my hands on anything I need without searching for it. Likewise, I can't concentrate on one thing for more than half an hour or so. I start something, get up to find what I need, and then come back to my desk and start something else. I've been multitasking for most of January so far. Some people can multitask effectively, but me, I end up only completing half a job.

For example, I've been writing this blog post since last Saturday, and now it's three days late.

That's the down side of not having a desk. The up side is, we now have a table.

A dining table is great. Having a dining table means we no longer eat huddled on the sofa or crowded round the coffee table. It means we sit as a family and talk to each other whilst at eye level to each other. As a result, we linger more over our meals, talk longer. It's a place where my son can do his homework while I do some admin at the same time. It's where my husband and son can set up building projects on the weekends. It means I can invite people round for meals (I invited people round for meals before this anyway, but it means I can invite them and they no longer have to be afraid of spilling their meal onto their lap).

Work-wise, this simple rearrangement of furniture has been difficult. Life-wise, it's been nothing short of wonderful. It's extraordinary how your daily habits can change from a simple movement of furniture.

Fortunately, we're moving house soon (if the gods are willing), to a place where I can have a desk and a dining table, so I won't have to sacrifice my career and my posture for a harmonious family life for much longer.

Where do you work? Have you had to make sacrifices to have this place, or have you reached a happy solution?
Posted by Julie Cohen at 9:47 AM 1 comment:

Often when I'm asked by other people to describe a writer's life, I use analogy. I tell them writing is a craft, and that like any craftsperson, a writer starts rock-bottom: as apprentice to the masters.

Like a cabinet-maker learning how to craft a chest of drawers, the writer takes the tools in hand, and learns the use of them, the tricks of them—the way to make a smoother-sliding drawer, to make the joints dovetail more neatly; how to polish and to decorate the piece until it's pleasing to the eye. Learn these lessons, and you'll make the upward climb of any craftsperson, no longer an apprentice but a journeyman, at work upon the masterpiece that will, in time, admit you as a worthy member of the guild.

That masterpiece is not, as many think, the greatest work you'll ever make—it's just the first work you produce that's at the level of the masters who have trained you. You still have new techniques to learn (and to invent), and if you are creative and work hard enough, you might just reach the level where a person only has to glimpse a chest of drawers to know that it was made by you. 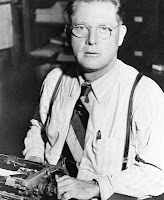 Which brings me to Erle Stanley Gardner. A master of the craft himself, creator of that father of the modern courtroom drama, Perry Mason, Gardner once advised: "The beginning writer should write all types of stories for all sorts of markets until he has found his particular niche in the literary world. The veteran writer who would keep from going stale must take a fling at new slants, at new angles."

Because that's the challenge, isn't it? Once you've found your niche, as a writer—once you've learned to make that chest of drawers—what then? How do you keep the work from going stale? Sometimes a cabinet-maker tackles this by also making chairs, or desks, or bookshelves...but what if even your best bookshelf isn't quite up to the level of your chests of drawers? And what if chests of drawers are all the public really wants from you?

Well, then, as Gardner says, you have to get a bit inventive. Change the wood, or add an inlay; turn the legs a little differently. Toss in a secret drawer.

With every book, I like to push myself beyond what I've designed before; to try, as Gardner dares me to, new angles. And I'm doing it again, with this new book I've just begun: A Desperate Fortune. Like the others, it's a dual-time story, but it has no paranormal features, and the modern story's heroine is unlike any heroine I've ever tried to write before.

I'm never sure I've got the proper tools to do this sort of thing. I'll have to rummage round to find them, or make new ones, and I'll definitely have to learn new skills, but that's all part of what, for me, keeps writing so fun and exciting.

What keeps you from going stale?

(Come back Thursday, to catch up with Julie's post)
Posted by Susanna Kearsley at 1:06 PM 12 comments:

Ahh a brand shiny new year with no mistakes in it (well not too many). Of course new year is the time that we all make resolutions with bright eyed enthusiasm only to see them fail by February.

This year I'm not sure I can make any resolutions, too much is up in the air and other than resolving to 'keep on going' I'm not doing much else.

1. Keep on going (this cover everything from work/life/writing)
2. Be fit - this one I know will come and go. However I have been good at doing at least 30 minutes of exercise most days since November I should be good to keep on going. Swimming is fun!
3. Eat well(ish)
4. Write when you can
5. Treasure those you love

I'm hoping that I can at least stick to some of them... maybe.

What are your resolutions for 2013?

Come back on Sunday to hear from Susanna
Posted by Unknown at 9:25 AM 2 comments: