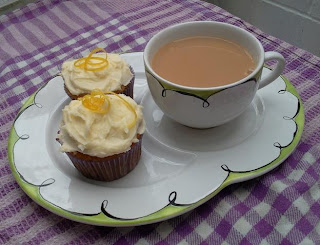 April is a fine month for writerly birthdays.

Which, all in all, means that Julie, Liz and yours truly are in very good company... Yes, this week it's our birthday! So we thought we'd continue the party and share our favourite birthday (or any time!) cakes with you!

Julie's cake is pictured above - a cake she made herself, on a dish given by Brigid - and the recipe can be found here (I'm drooling already). 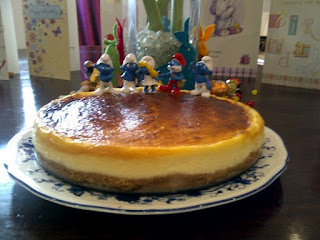 Liz sent a picture of her cake from Dubai, complete with smurfs - it's a cheesecake made with fake sugar and thus low carb!

Christina is sharing her recipe for Easter Cake: 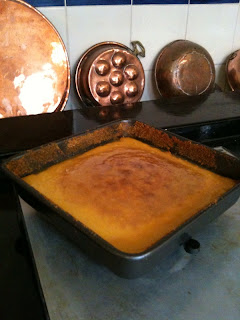 Grease a 9 inch cake tin and shake some breadcrumbs over the surface so the cake won't stick to it. Add the cake mix and bake in a 175 degree Celsius (340 Fahrenheit) oven for 25-30 minutes.

Icing - put 1 egg yolk, 75 grams butter, 100 grams caster sugar and 1 tablespoon of vanilla sugar into a saucepan and bring to the boil while stirring. Pour this over the cake as soon as it comes out of the oven, then leave to cool for a little while. Eat while still warm though! 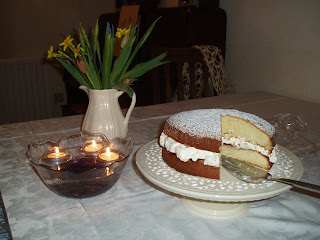 There's a good recipe here, but I prefer using half and half Orgran self raising GF flour and Dove's Farm.
Brigid said she'd selflessly provide the drinks for our little cakes party.... "How about some Twinkles?

3. Top drink with champagne and add a twist of lemon.

Posted by Anna Louise Lucia at 2:38 AM