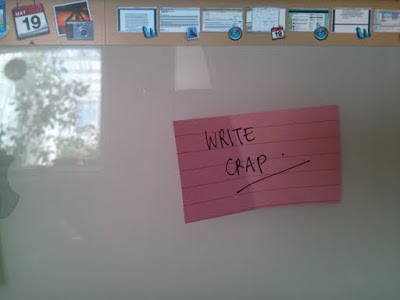 I have a post-it on my computer monitor saying WRITE CRAP. It's one of the most valuable pieces of writing advice I know.
I told that once to a reporter and they happily printed the fact that I believed I was publishing foecal matter, so let me explain what I really do mean.
I'm not saying my books are crap. Well, they might be, but I'm sort of attached to them so I wouldn't abuse them so soundly. What I'm saying is that at the composition stage, it's actively useful for me to allow myself to write badly. If I felt that I needed to fill each and every page, every little sentence, with exactly the right words—if I tried to produce a final draft when I was really creating a first one—I would be paralysed. I would be depressed. I would never write anything at all.
I realised, quite early on in this game, that my first drafts are rubbish. They're full of bad words, or good words put the wrong way. Dodgy motivations, two-dimensional characters, sketchy settings, large chunks where nothing happens, things that basically any four-year-old with a pencil could write better than me. They have big gaps where I'm not sure what should happen. They have XXXs where I haven't been bothered to find the correct word or do a bit of research.
They are so bad, that nobody should ever be forced to read them, ever.
The thing though, is this. First drafts are MEANT to be rubbish. First drafts are written to benefit the writer. Some people call them "discovery drafts", which is a useful way of thinking: a first draft exists so that the author can discover the story, making lots of mistakes along the way.
At the beginning of a story, I need to allow myself to write crap. Depressing as it can be, I need to write words knowing I'll be deleting them later. Because the wrong words lead to the right ones. And making mistakes—writing crap—means that when it comes to doing a second draft, I'll have learned the right thing to do to make the second draft NOT crap.
You write crap so that you can fix it later.
I'm reminding myself of this right now, because I've just finished copy edits on a lovely, finished, polished manuscript which is as perfect as is humanly possible for me to make it right now, and I've plunged immediately into writing a new first draft for a new story. And boy, is it bad, especially compared to the coherent thing I just sent off to my editor. It jumps around all over the place. I can't get a grip on the heroine, or her friends. I'm not really sure that the plot makes sense. In fact, I'm pretty sure it doesn't.
But I need to give myself permission to write crap, or else the crows of doubt will be pecking my eyes out with a vengeance. I need to remember: it's okay to make mistakes. It's NECESSARY to make mistakes. We all do it, because we all need to.
I might need some more post-it reminders, though.
Please come back on Sunday, when Anna Louise Lucia will be posting something possibly less crap-focused.
Posted by Julie Cohen at 6:14 AM